Combat on land follows general PvP rules, but the seas are a dangerous place where piracy is always a risk when out on open waters. All PvP actions that ships can take at sea depend on the current color of their sails. All ships must abide by the sail color classifications. 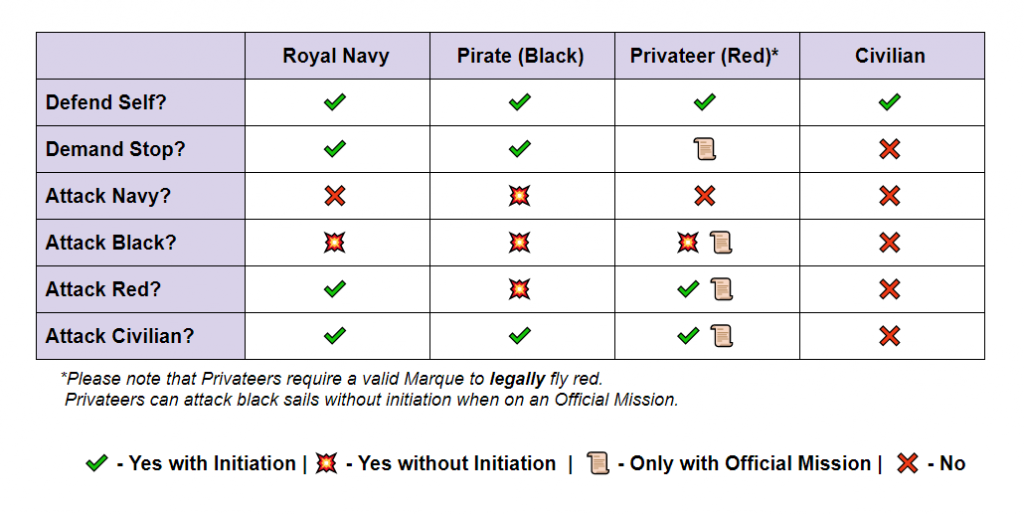 ► Step 1: Initiation (Demand)
Similar to standard PvP initiation, in most naval situations you must actively engage another ship’s crew before combat can begin. If you are at a distance, set off a flare to signal the nature of your approach. Once you are within vocal range range, yell your demands and signal the other ship to stop and raise their sails. Only pirates sailing black flags and the Navy sailing official naval vessels may demand that other ships stop for inspection ‘or else’. All other ships may ask, but not demand or initiate combat.

═════  Option A: Parley or Surrender: If you would like to signal for immediate surrender or would like to attempt negotiations, raise your sails and stop your ship.

═════ Option B: Combat: If hailing the ship is ineffective and the ship refuses to stop, fire a warning shot.  Wait enough time for response and then move into position to begin naval combat. No other initiation or previous PvP is required while on open waters as long as you are abiding by the “ship classification” rules.